Knowing Why We Do It

It takes a while before I find the house that I’d been looking for for the greater part of an hour, on foot, under a monsoon downpour. It is a small house which, from the outside, seems like a bungalow, I can’t really tell in the darkness that has hitched a ride with the rain. Situated along a tiny street in the sloping community of Batasan Hills, it is a humble abode, owned by Allan Saranillo, the man I come to see. A small door is open, which leads into a tiny area with a row of PCs along the wall. All the seats are taken, occupied with the neighborhood’s youngsters, playing video games and surfing. 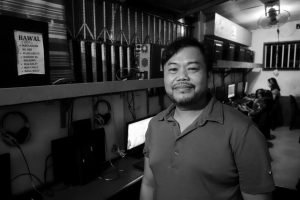 AS Allan Saranillo in his Internet cafe.

“I opened an Internet cafe a few years ago,” says Saranillo, a man who looks to be my age, forties, dark-skinned, a little bit disheveled, wearing an old polo shirt and green Hawaiian shorts. “Kailangan eh.” He invites me to sit at a small table just outside his living room. We start talking.

Saranillo first sailed at the age of 24. “I started late. Other seafarers were already sailing at 21, 22.” Back then, he recalls, regulations weren’t as tight. He joined the crew of a bulk carrier as an OS, an ordinary seaman, without any prior experience, even in inter-island vessels. “I think that was a mistake,” he says. “Because I was not prepared.” Flying to Rotterdam to board a vessel flying the Greek flag, he was immediately set to work straight from the plane. No recovery from jet lag on his first international trip, no time to rest, he wept from shock as he was tasked to clean a warehouse at 3AM in the cold. “I was in shock. I think I made a mistake. I should have studied Customs instead of Nautical at PMI.”

It took Saranillo four months to get his sea legs and to get used to life on board. He earned his first paycheck, a far cry from what he used to get employed under SM Shoemart. “After I received my taste of earning and getting to visit a few ports, I felt much better. Naka-vibes ko na yung crew, nakuha ko na yung loob ng First Mate.”

Back then, unmarried, his cure to loneliness lay in the letters he would exchange with his parents back in Manila. An agent came to the ship to collect all of their mail. He would take that to the shipping company who would forward it to the crew’s loved ones back home. “Swerte mo na kung maka isang buwan lang. Minsan makaka dalawang buwan, kung malasin ka, tatlo.”

When sailing near the Philippines, Saranillo and his crewmates also relied on what many refer to as “Over, Over,” a clunky system of communication involving a shipboard radio, a receiver on land, and a telephone patch to a land line. ‘Mga beinte-singko pesos ang per minute noon.” He is, naturally, happy that communications are much easier, cheaper and more reliable.

Saranillo communicates with his family, a wife he first met at church and his two daughters, aged 15 and 18, via the internet, through email and chat, livestreaming and video. He married his wife when he was 32.

He is very thankful of his fellow crew members who were there whenever he had problems. “We would all console each other, try to keep each other happy even during bad times at home. Kailangan talaga makipag-kaibigan ka sa barko. Hangga’t maaari, lahat kaibiganin mo sila doon. Kwentuhan kami. Sharing, masaya pag may birthday.”

An officer position and its corresponding scaled salary is not in the cards for Saranillo. Now he is an AS, an able-bodied seaman, but he is proud of that. While he may not be rolling in cash, he has established multiple streams of income. “Pinauupahan ko yung mga kuwarto dyan,” he says as he points to the back of his house. He has a second house nearby, which he also leases out to tenants. He sees himself having five or six years more to give to the high seas, and he is determined to see his family have a better life: enjoy the blessings he earns, get his kids through school, and live the rest of his life in security.